Today, together with Dr. Edward Clarke, as part of the art course "Initiation into the mysteries of Western art", we visited the most famous of the Middle Ages Gothic cathedrals - Notre Dame de Paris.

The world famous cathedral is a true symbol of French culture and history. The impressive architectural composition thrills over 14 million visitors annually, making Notre Dame de Paris the most visited architectural landmark in France and Europe.

Some of the most prominent historical figures have passed through the doors of this magnificent building. It hosted royal weddings such as the wedding of Mary, Queen of Scots, and Francis II, Dauphin of France in 1558, as well as the baptism of kings and princes and state funerals, such as Charles de Gaulle in 1970.

In the middle of the 19th century, Notre Dame underwent a major restoration by the French architect Eugene-Emmanuel Viollet-le-Duc. It is said that the popularity of Victor Hugo's historical novel Notre Dame de Paris (1831), in which the cathedral is the center piece, inspired its renovation. The dramatic fire in Notre Dame de Paris on April 15, 2019, left people around the world in shock and bewilderment. During a restoration campaign, a fire broke out in the cathedral's attic, which destroyed most of the roof, the 19th century Viollet-le-Duc spire and some of the ribbed vaults.

An official investigation, which continues today, began immediately in order to uncover the cause of the fire, without excluding any hypotheses. France promises that by the start of the 2024 Olympic Games in Paris, the public will see firsthand the renovated cathedral, which has been reborn like the Phoenix, thanks to colossal donations from around the world. In the meantime, Dr. Clarke has revealed to the public of our virtual art course many of the secrets from the history and architecture of this masterpiece.

The next stop on our art path is The Baptism of Christ by Piero della Francesca. Join us!

Find out more information and sign up for the course: 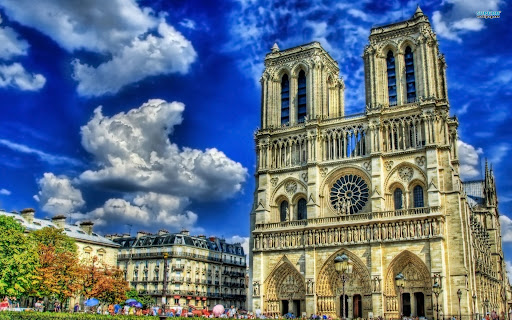