Today, during the virtual art course "Initiation into the Mysteries of Western Art" with Dr. Edward Clark, we got to the Saint-Lazare Cathedral in the city of Autun. This magnificent cathedral was visited by pilgrims from all over the world to see the relics of Saint Lazarus.

However, the Romanesque tympanum, which depicts the Last Judgment, brought glory to the cathedral in Autun. This unique piece of art was created around 1130 by the master Gislebertus (Gislebert). Here Christ is depicted watching over heaven and hell, to the right of him is Saint Michael, here souls are weighed on the scales, and the devil overturns the scales.

The detailed tympanum left many mysteries that can be comprehended only by studying its hidden spiritual meaning. In today's lecture, we learned about mandorla and sacred geometry, which testifies to the early stages of Romanesque art. We also learned that it is here, in Autun, that the symbol of scales first appears in Western art, and that it directly links the tympanum to the tradition of Byzantine art. The popular devotion to the Virgin Mary at that time is evidenced by the fact that for the first time in the Western artistic tradition, she is depicted sitting in a frontal pose. Analysing the work, we came to the conclusion that the meaning of the depiction of the Last Judgment in Autun has much less to do with the intricacies of theological debate than with the primitive legal system.

Next Friday, the art journey will take us to France, where we will discover the one and only Notre Dame de Paris. If you would like to join us along the way, please contact Cherwell College Oxford: 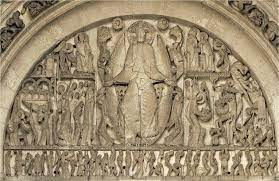